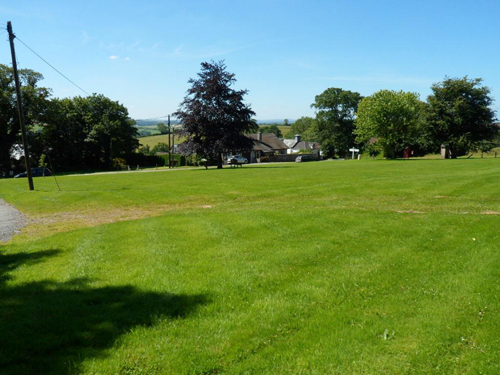 BROADWOOD SPORTS COMMITTEE was founded according to the minutes in August 1923, the first two pages of the minute book are missing so we have no information regarding the first event. The first minute is a committee meeting held in the Church Room, which is a report of the Sports Day held on the 19th June 1924 which made a profit of £29/4/11d. £12 was given to charities.

Why and how the committee came into existence still remains unknown, due to the inaugural minutes from 1923 being missing. First mention of the marquee is in a minute dated 7th May 1925 which states “Mr Rich proposed that £3 should be the charge for lending the marquee to Lifton”. The marquee seems to have been an integral part of the Sports committee throughout the committee’s existence. Repairs, renewal, sheds to keep it in and people to erect and look after it featuring a lot in the minutes from 1925 to 1972.

From 1923 to 2015 when it was wound up, the committee was made up entirely of men. New members were proposed and seconded onto the committee by existing members, certainly up to the seventies. However, the women were fully involved in the preparations and work, such as refreshments. In the early years of the committee, some ladies were asked to “take tables” providing and serving the teas, while others were employed as “cutters up”. In 1949, the W.I. appear to have taken over the catering for the tea. In the early years of the minutes the term “carting” was used for the transportation by the men of tables, chairs, wood, crockery, marquee etc. In the 1930’s and 40’s an attendance register was kept of members attending committee meetings.

From the start of the first minutes available in 1925 the event consisted of Gymkhana, Sports, Pigeon shoot, Tug of War and a draw (e.g. leg of lamb, Box of Chocolates) with a laid tea to follow. In the evening, a concert was held with concert bands being invited for the entertainment. In later years, events such as a Rodeo and skittles were added. Broadwood invited children from Virginstow Parish to enter the races in 1930 and, in 1932, Virginstow Parish became formally involved providing three committee members and subscribing £5 to general funds.

In 1967, in addition to the Gymkhana and sports day, a Bonfire, fireworks and barbeque was held in the November. This event took place for three years, and was then replaced in 1970 with the first children’s party, which was held at Ivy House school sponsored by the committee for all the children in the parish. This was to continue for many years.

Although no member of the Rich family is left in the Parish, the name is familiar throughout the minutes from early times up to the 70s as Town Farm was used as a venue many times. The “Rich’s” field used for the Sports was situated where Diana Close is today. Mr Northey’s field, also mentioned as a site for the Sports, was on the higher side of the green, with the entrance by the lane leading to the Old Vicarage.

SOME INTERESTING AND AMUSING QUOTES TAKEN VERBATIM FROM THE MINUTES

1926 The marquee to be erected on the green.

Mr James offered to give two pullets as a prize for throwing a ball.

1927 Mr A Rich (Town Farm) offered use of the same field on condition that no betting be allowed.

If the marquee should be lent to other parishes, somebody to be sent to superintend the erection.

Band – The charge for the Ashwater Band was £4 for 10 players, however Launceston Municipal Band (20 players) offered to come for £4, the committee to pay for the motor. The secretary to make arrangements for cheapest conveyance and to engage the Launceston Band.

1928 Mr Waller to order 1 cwt of coal from Moon’s, Rev Doherty promised wood for furnace and Mr Davey promised to cut and cart it.

1929 Agreed to have a flat race for horses open one and half miles, any height.

1931 Sports to be held in Mr Northey’s field as last year.

To have the open mile race for men before tea.

1936 Proposed that the Liberal Party pay £2 for loan of marquee at their fete.

The questions of Mr Doney’s entrance fees be left until sports day and that he be not allowed to enter any events this year before paying last year’s entrance fees.

1937 The secretary to see the sergeant to send a constable to the sports.

1938 At a committee meeting on March 6th 1939 it was proposed and seconded that “Mr Balkwill be payed £2/10/0d towards the cost of his teeth, if he does not care to accept to attend the next meeting”

1939 It was proposed and seconded not to insure cars or against food poisoning.

1940 All proceeds going to the Red Cross.

Mr W Parsons agreed to heat the water or do anything he could, provided all other helpers done the same.

No minutes from the end of 1940 until 1944, it looks as if they are missing as we do have a list of presidents for that period.

1944 Sports not held in June as is usual but September in Mr Northey’s field.

Iris Halliday’s offer to take charge of and supply the goods for a pound stall be accepted.

Marrow – Miss J Worden to take charge of a vegetable marrow for competition.

1945 Suggestion to divide profits between the Red Cross and Welcome home fund, however an amendment was carried 9 votes to 6 that all profits were to go to Red Cross Funds.

1946 A sub committee was formed responsible for the loan of marquee of Messrs Richard Worden, W Rich and W Cole.

1948 To have a fowl for a draw, Mr D Hicks offered to supply same for 10/- which was readily accepted.

1949 Mr Parker of Launceston asked if he would be allowed to come into the field with mineral water and ice cream and serve fish and chips after 7o’clock it was proposed to allow this.

Ladies WC – to have a Ladies lavatory made and Mr C Parsons to make and repair.

1950 It was proposed that the W.I. be asked to be responsible for the tea again and run a stall.

1951 A letter was read from Mr D Colwill head of Parish Council asking the sports committee that they call the sports this year the Festival of Britain Sports it was proposed not to accept.

Proposed that all children eight years and over who do not win a prize to receive one shilling each.

1953 To allow the hire of the marquee for a Conservative garden fete at Broadwood Vicarage on July 18th at half price.

1954 To have a motor bike race included in the programme.

Moons from Ashwater to do the carting this year as Glover and Uglow are getting to expensive.

1955 Mr C Parsons to make a new set of skittles also to make enquiries regarding the price of new skittle balls. The three skittle balls were bought at a price of £5/17/6d

1957 To have four new tablecloths as the old ones were rather worn out and Mr E Martin to get them as cheaply as he could.

New Shed – to build a shed to store marquee etc after putting it to the meeting it was decided to start as soon as possible also to build a gable roof. (at Tredown)

1959 Decided to have a new skittle board made and Mr W Parsons to be asked to make it. Mr K Martin bought old skittle board for £2/10/0d

1960 It was agreed to send the marquee to Messer Topes and Co to be repaired and retreated.

1961 A letter was read from Mrs C Parsons regarding the W.I. suggestion for a Buffett tea, after some discussion it was proposed to ask them to have a laid tea as usual.

1962 Instead of the concert to hold a social after the sports and ask Mr Mills to be M.C.

1964 Lifton Rector needed the marquee for four or five days and it was proposed to charge £20. Amendment proposed and seconded to charge £24 after putting it to the vote the amendment was carried.

Decided to have an identification parade this year during the social instead of the ankle competition.

1966 Mr Bush to come and supply a sweet and ice cream stall.

1967 To have a talent concert and to hold it in the marquee.

Push Ball – to have push ball and the secretary make enquiries about how to get one. Later decided to have teams of eight. Proposed to find out what St Giles did and we agree to do the same.

November 3rd – to have a bonfire and fireworks at Mr Rich’s and to spend £10 on fireworks.

1968 The committee was told of the damage caused to a clock when borrowing the piano from Mr Dainty of Ash Mill. The secretary stated that he would inform the committee of any claim for damages which might arise from the accident.

1969 Bonfire to be held on the 7th November and Mr Palmer get £10 worth of fireworks and try to improve selection with less emphasis on rockets.

1970 It was alleged that judges had been heard to complain about lack of stewards at the gymkhana.

Mr K Shopland told the meeting that the ladies toilet would have to be moved to a different site owing to ploughing operations.

Proposed that a children’s Christmas party be held instead of the bonfire. Mr Badge agreed to find out if it would be possible to hold the party at Ivy House School. That the presents should be a packet of sweets, apple and orange. Mr S Heard agreed to be Father Christmas at the party.

Note in minutes – Heavy downpour of hail and rain on 13th May for about one hour, houses flooded at Grinacombe Moor.

1972 Gymkhana and sports held at Tredown. 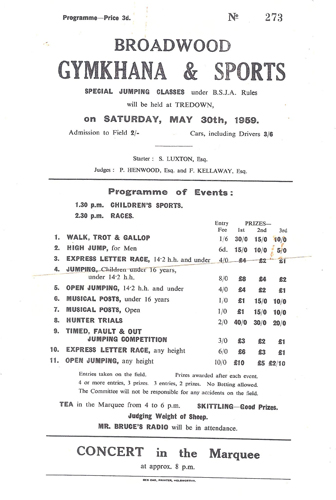