Church Terrace and the House of Industry 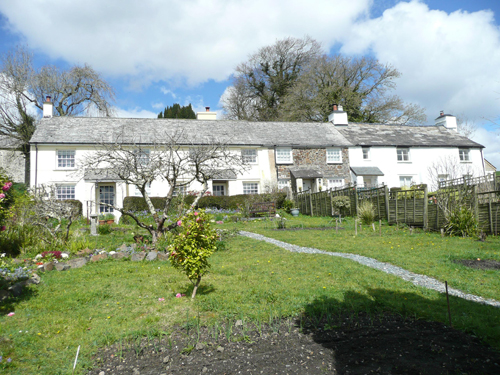 The history of Church Terrace and the House of industry

The terrace was thought to have been built around the mid 1600s, stone rubble to the front and cob on stone rubble footings to the rear, which forms the south boundary wall of the church yard. Originally, what is now numbers one to three were open plan downstairs, with three large fireplaces and bread ovens. It is thought that access to the upstairs was direct from the churchyard presumably by bridge as there is a small stream running behind the building. There is still an upstairs fireplace in number 2 and there was one in number one-only blocked off in Victorian times.

We have no idea what this building was used for, only that it was church property and probably used as a meeting place up till about the late 1700s, when it became alms houses/house of industry. We will try to find out about the original 150 years of it’s life when we look at church records, if they still exist in Exeter archives, but, as English Heritage says, it was a former hall and inner room and they presume it was some sort of meeting room for the parish.

The first documented knowledge we have is that in June 1797 in the reign of George 3rd the then reverend of Broadwoodwidger church, William Harris, and church warden, William Eastcott, conveyed the plot of land on which Church Terrace stood to William Eastcott’s sons, Richard of Upcott, William of Frankborough and Thomas together with a William Rowe of Cross, John Palmer of Slew and James Smale of Thorne for 5 shillings to convert it into a house of industry for the poor of the parish.

At this point number 4 was added to the East end and the total building was converted into four separate houses with drinking water to be taken from a well in the adjoining east field and we believe washing water from the church well to the west side.

Houses of industry were charitable institutions established in the 18th and 19th centuries in various cities in the British Empire under the poor law to offer relief to the destitute but, in parishes such as Broadwoodwidger, they were alms houses to offer temporary or permanent lodging, food and fuel at a very low rent to the poor ( I believe by some sort of means test).

Nothing else is known until 20th June 1834, when Richard Eastcott alone granted the lease, as overseers of the poor house to a William Palmer, James Smale (Church wardens) and a John Hall and Richard Martin. The term of the lease was for 60 years from Ladyday at a rent of £2-10s per annum.

On the 8th August 1856 an action was commenced in the Chancery division of the high court in London by a number of the parishioners and inhabitants of Broadwoodwidger, who complained to the church wardens and the overseers of the poor that Richard Eastcott, John Hall and William Arundell Harris Arundell had misapplied the property and, as a result, John Hall admitted that the house of industry should be held on the trusts of the original deed and agreed to give up possession and relinquish the title deeds and pay costs together with £5 damages and account for all the rents and profits received by him from the property since he took possession in 1834.

In 1863 the current churchwardens and the overseers conveyed the property to Christopher Vickery, a local butcher, for 5 shillings. Living and paying rent at that time were Richard Matthews, Thomas Hellaway, Mary Worthey and William Martin.

Later that year the churchwardens and overseers of the poor acting in persuance of an act passed during the reign of King William 4th conveyed the land and the dwelling house known as the house of industry to Christopher Vickery for the sum of £113. There is no note with the title deeds of his death but evidently it passed to Thomas Vickery of Lewdown, a retired farmer, who died on the 13th November 1906 at Holestreet Marystowe and probate of whose will was granted out of the Exeter district probate registry to John Vickery his nephew on 15th January 1907.

The poor house was then passed through the Palmer family and, in 1943, the easternmost of Church cottages was conveyed to Olive Werren and, in1950, no3 was conveyed to Harold Burden.

In 1965, nos 1 and 2 Church Terrace were sold by John Palmer to Elsie Maude Strout of Pengelly, Linkinhorne. In November 1968, Mrs Strout sold no1 to Samuel and Ivy Lummis and, in October 1985, they sold the property known as no 1 to Peter Haywood and James Penny.

In November 1991, Nos 1 and 2 were sold to Jane Ashdown who made major renovations and lived in the property until September 2006.