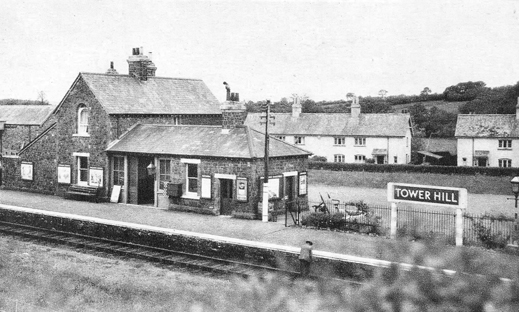 The London and South Western Railway long had designs on challenging the Great Western’s monopoly in Cornwall, and this marked the start of an ambitious westward expansion which took nearly half a century to complete.

In 1871, the LSWR absorbed the Devon and Cornwall Railways line from Coleford Junction to Lydford via Okehampton, and eight years later, that railway’s branch to Holsworthy. In 1882, on 18th August, the North Cornwall Railway, under the aegis of Waterloo, was empowered to build a railway from Halwill, on the Okehampton to Holsworthy line, to Padstow, via Launceston and Wadebridge. The ultimate aim of extension further west was very popular. Times were hard, and construction was slow and North Cornwall opened its railway on to 400 square miles of under-developed countryside and bestowed upon many thousands of country people the inestimable benefits, material and intellectual, of rapid communication. North Cornwall was a difficult country in which to build a railway and the Halwill to Launceston section opened to traffic on July 21st 1886. It was 6 more years before Tresmeer was reached on July 28th 1893. Almost 13 years after the act was passed, Wadebridge was reached on June 1st 1895 and the section from Wadebridge along the Camel estuary to Padstow opened on March 27th 1899. There were intermediate stations at Ashwater, Tower Hill, Launceston, Egloskerry, Tresmeer, Otterham, Camelford, Port Isaac Road and St. Kew Highway. 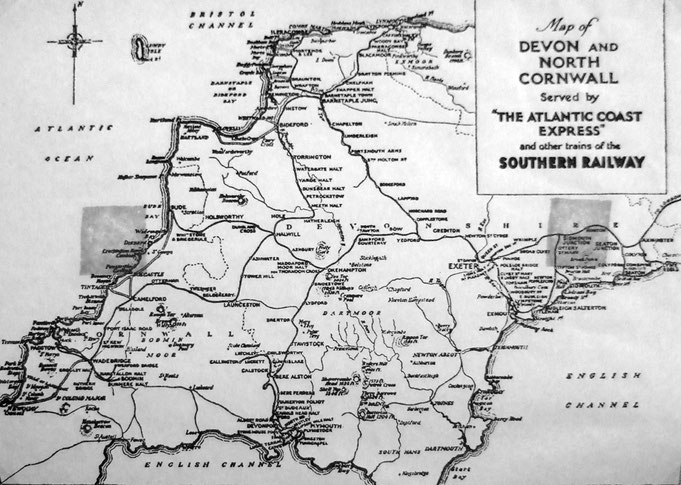 Tower Hill station was situated on one of the prettiest lines in North Cornwall. On the descent from Halwill to Tower Hill, one enjoyed a brief jaunt across heathland country and steep hills before entering the run down through Ashwater. Along here one enjoyed the enchanting view, embracing the western slopes of Dartmoor and the long sweep of Cornish hills with Launceston just discernible in the distance. Almost immediately, the line enters the narrow bird-filled wooded valley of the River Carey on a gradient of 1 in 75 at which average it descends for some 3 miles, running through the ancient parishes of Virginstowe, St. Giles and Broadwoodwidger, to descend to Tower Hill, a delight in green. However the site here where the station stood was hotly disputed, with many locals favouring Boldford, one and a half miles nearer Launceston.

Tower Hill Station was a hive of activity. It consisted of a station building which was built from some of the stone quarried from the workings near Ashwater. It had a bluff square set design with gables at right angles, round topped windows and single storey wings, a design that was repeated with variations all along the line.

The station building consisted of the Station House, Ticket office, Waiting rooms and Toilets. Later one of the waiting rooms was turned into a signal box. There was a signal box situated near the platforms on both sides of the railway line.

The station building was on the up-side, a small shelter on the down-side, and typical granite post name boards on both sides of the platforms. There were a few sidings leading into a small goods yard, where potatoes, vegetables and cereal crops, and animals were kept before being loaded onto the trains to go to the market at Launceston. A war depot was also added in 1943, but removed by 1956, this was to cope with the extra traffic and storage caused by World War II. It was also found out later by locals that there was much ammunition stored there, looked after by the Americans. Now the area where the depot was serves as a shelter for animals, and grazing land.

Tower Hill Station served a cluster of farms and cottages, however it was not considered quite as important as Ashwater, and indeed the night mail called at Ashwater but not at Tower Hill.

The railway line consisted of a short section of double track travelling through the station, this was to allow two trains to pass each other. However just after the bridge, the line joined up to form just a single track again. 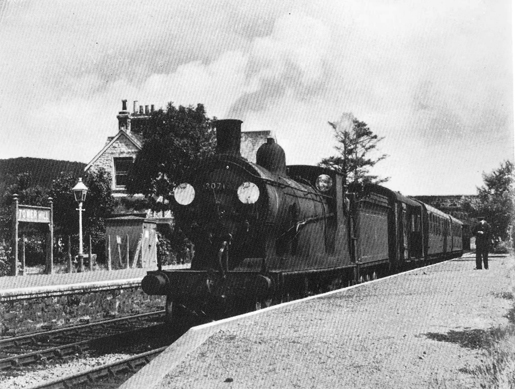 In the Station House the station masters lived. Some of the station masters who lived in the house were Mr. Dalby, Mr. Cudmore and Mr. Sampson. Also nearby lived some of the porters and ticket collectors, some of whom were Mr. Parsons and Mr. Eppy. Furthermore, in 1904 four railway cottages were built and these were accommodation for the gangers and railway line workers, some of whom were Mr. Cann and Mr. Rickard. The widowed Mrs. Cann still lives in one of the railway cottages with her sons.

It is from here that the valley opens out and one travels along one of the straightest pieces of line on the railway. The gradient eases to milepost 222, where it rises for one mile at 1 in 94, crossing the River Carey and the road, on a three arch bridge at Heale. The earthworks proved troublesome all down this Tamar Valley, drainage of the heavy surface water being the main problem. Soon, via a girder bridge on granite faced piers, the North Cornwall Railway crosses the River Tamar and opens up a fine view of Launceston Castle, towering above the Town as the train ran into the station, crossing the GWR route to Launceston which converged here on the last leg of its 32 mile course from Plymouth.

This line constructed by the LSWR was in 1923 to form part of the newly constituted Southern Railway, and later at nationalisation, January 1948, the Southern Region. 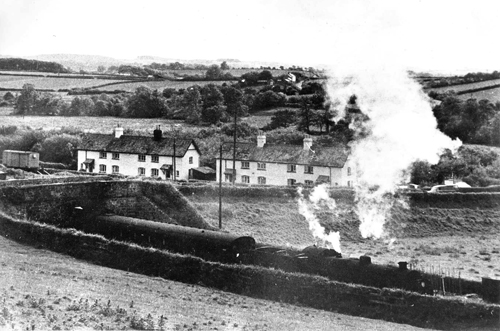 Beeching and the last few years

In 1963 the Southern lines suffered a severe blow under the Beeching plans to close many of the lines. Dr. Beeching decided that the railways were running at a loss; because of the rising costs, competition from alternative forms of transport, and the consequent fall in numbers of passengers. However there was a 6 month reprieve, before it finally closed.

An impression given by a traveller in August 1966, two months before Tower Hill Station closed:

“I descended the steep hill down to Tower Hill Station as the signpost still proudly said. Alas! Tower Hill, now officially a Halt, was silent and deserted, its yard lifted, its station building closed, though there were curtains in two of the cottages. I found a gate that opened, and meandered onto the platform. It was now raining, and the scene was depressing. The down platform road stood still, rusty from disuse, the old granite name board still bravely announcing “Tower Hill” as did the modern green metal ones. The clouds towered above the steep woods and farms: could there really be trains still? Sure enough, just after 7 o’clock, the sound of an approaching train came upon the ear, a diesel rolling fast down the secluded valley from Ashwater, and the single unit W55017 hove into view, the driver and guard both surprised to see me. There were four passengers besides myself and after the guard had assured me that I could get back from Launceston that night, I got in. We bowled off at a spanking pace, roared across the Tamar, and rumbled into Launceston.”

The traveller then heard the station master ask the guard who he was, and heard the guard reply:

The travellers impression arriving back to Tower Hill:

“Up through the lovely country we ran and so came again to Tower Hill. The guard ran up to take my ticket and waved to me as the train ran by. I stood for a while on the platform listening to it’s sound growing fainter, then echoing louder again, then dying up the valley of the hanging woods.” 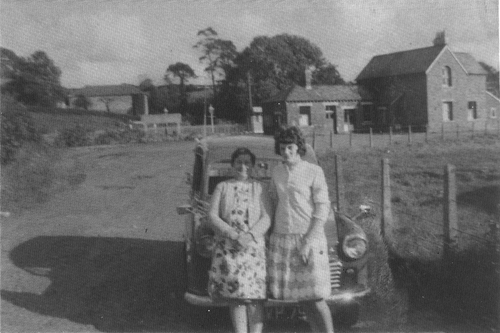 The final closure of the Wadebridge to Halwill section came on October 3rd 1966, while that from Padstow to Wadebridge lasted until January 30th 1967. The Atlantic Coast Express had been withdrawn in 1964 and freight over the line ended in 1965.

The last train on that line was from Wadebridge, a single unit railcar, and it was packed with children riding in the luggage racks, and a second unit being added at Launceston. All along the line there were big crowds of people, especially at Launceston and Bude, seeing the last train travelling along the railway.

The lamp that used to stand on Tower Hill Station platform now acts as an outside light in the garden of Mrs Beere.

A few years later after the closure of the station, the station buildings and the stone house was knocked down, much to the absolute horror of the locals, who were very interested in turning it into a dwellinghouse. After the demolition men had arrived, a Mr. John Perkin tried to stop them, and asked for a few hours so that he could get a Court Order against them. However, they would not wait, and so the destruction began. It has been said by the locals since, that they knocked down the building by mistake, instead of some other building, because it is probably the only one station building demolished on that line.

Today Tower Hill Station uniquely on the line has almost entirely disappeared. All the buildings have been demolished, and only fragments of fencing and part of the platform survives.

The row of railway cottages to a pattern repeated at numerous places along the line have been transformed into very pleasant dwellings with new extensions built on and many alterations. There are gardens situated all around the cottages and part of the railway line and platforms are now gardens and vegetable gardens. Where the railway opened out into an open area, it has now been turned into a field, and fenced around.

However, further on down the line is heavily overgrown and badly waterlogged and the track beds are lost beneath a carpet of wild vegetation.

Now, a decade later, the West Country Roads are choked with queues of cars, and the rural peace is shattered by heavily laden lorries thundering along narrow, twisting country roads ——- therefore are there now rumblings of regret that this railway and station, like so many others, have been so drastically closed? 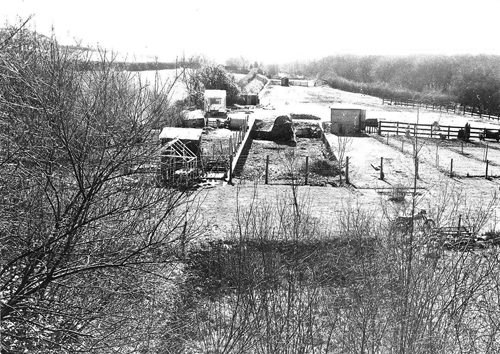 Written and researched by Diane Orchard – 1985

Locals from the village who have also given me additional information