The Harris / Arundell and Blagrove / Bradshaw families of Lifton Park 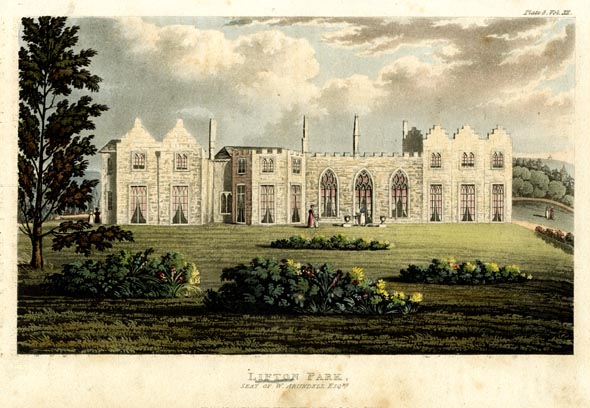 Magna Britannica in 1822 indicated that the manor of Broadwoodwidger was then owned by William Arundel (sometimes Arundell) Harris of Castle Park, Lifton (later known as Lifton Park).

William Harris (1794-1865) had a topsy turvy career. He was born on 17th September 1794 into the wealthy Arundell family, who then lived at Kenegie Manor, Gulval, Cornwall. However, his father died aged just 38, when he was four. He was educated at Eton and Jesus College, Oxford, where he matriculated in 1810. His mother then died in 1812. Accordingly, when he came of age in 1815, he inherited significant property – not only the Kenegie Estate but also the Lifton Park estate, which derived from the Harris family of Hayne, near Stowford, Devon, into which his forbears had married. When his grandfather had inherited this property in 1775, he had changed his name to Arundell-Harris.

William married, on 19th September 1815 at Gulval, Mary Lucinda (1794 -1871), second daughter of William Webber of Exmouth. He stood as a candidate in the Exeter parliamentary election in 1816 as an opponent of parliamentary reform, but withdrew before the poll, but his new wealth seems to have given him significant standing, for, in 1817, he was appointed High Sheriff of Cornwall, when just 23.

It seems that, when William inherited the Lifton Park estate, it did not have a significant property on it. Accordingly, he decided, immediately after his marriage, to construct a grand mansion. Its style has been described as follows:-

“The house is built in a Gothick style that still has much of the freedom and lightness of the 18th century and is as yet untroubled by the principles of Gothic structure or the archaeological correctness of Gothic forms of decoration. The designer drew on all the favourite stylistic motifs of the Gothic style, including traceried windows, battlements, and crowstepped and shaped gables, but these are artlessly combined with the large square sash windows and flat or low-pitched roofs of the classical Georgian house.” (Nick Kingsley on his webpage Landed Families of Britain and Ireland)

The identity of the architect has not been definitively established. The Rev John Wollocombe, who married one of William’s daughters, indicated in 1889 in his memoir that it was George Webber, who would appear to have been a relation of William’s wife, albeit he is not a known architect. There are also similarities with the Harris family’s principal seat, Hayne, near Stowford, which had been remodelled in a very similar style a few years earlier. 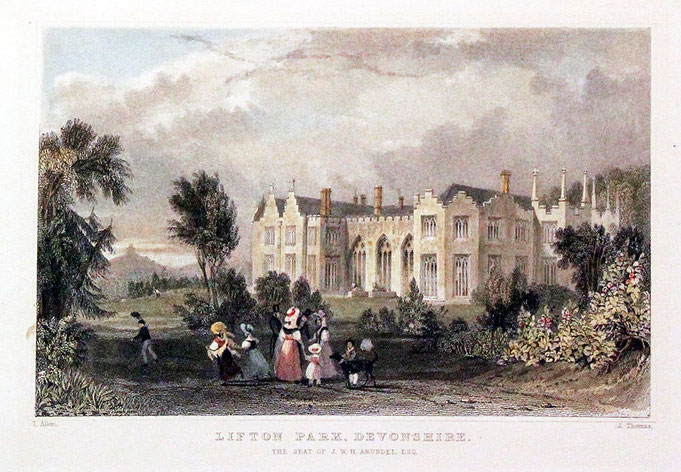 In 1822, William received Royal licence to change his surname to Arundell, so that he became William Arundell Harris Arundell! However, the Arundells were often spelt with one ‘l’.

In 1827, William, who had become a JP, was prosecuted by the Attorney General for the autocratic and oppressive use of his judicial authority against a local carrier who had upset him. The report indicates appalling behaviour on his part.

In 1828, he sold the Kenegie estate to help pay for the Lifton property.

In the late 1830s, he laid on at Lifton Park huge fetes and banquets celebrating family birthdays and anniversaries as well as the success of the Conservative party at elections, with a banqueting hall festooned with extensive decorations. Accordingly, by 1841, he was sufficiently back in favour with authorities to be appointed High Sheriff for Devon. 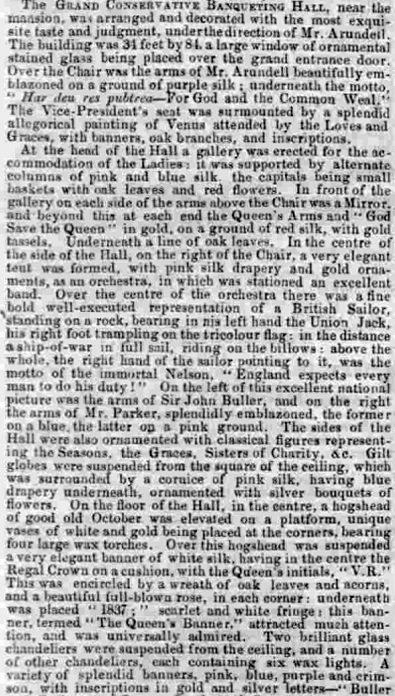 However, in 1842, he found that he had over-reached himself financially and he put the whole of the Lifton Estate up for sale. 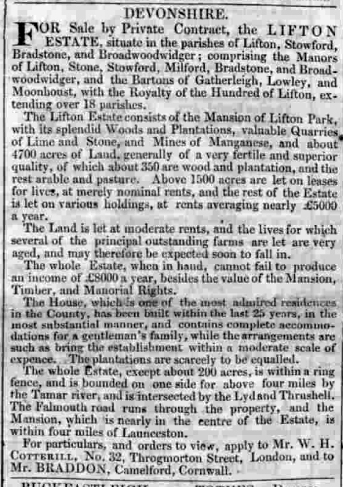 The Lifton Park estate did not sell in 1842 and early 1845 sees William Arundell campaigning strongly for the route of the Tavistock-Launceston railway to be via Lifton, as opposed to Brunel’s recommendation via Milton Abbot. Arundell was defeated and probably lost further money (and friends) during his campaign. In September 1845, he put the Lifton Park estate up for sale again. Whilst there is no mention in the later sales particulars of the various manors, including that of Broadwoodwidger, the total acreage offered was not reduced.

Whilst the newspapers referred to the purchaser as being Henry Blagrove, it appears as if the Estate was bought by a trust set up by his grandfather, Robert Haldane Bradshaw (1759-1835), a politician and agent to the Duke of Bridgewater, under which Henry did not become absolutely entitled until 1856. Henry Blagrove was born in Runcorn, Cheshire, in 1820 and was actually the son of Captain James Bradshaw. However, his father committed suicide in 1833 and, as significant family wealth came from his mother’s side, he had adopted the maiden name of his mother, Eliza, who was the daughter of John Blagrove, who had inherited significant funds from his grandfather, the owner of numerous plantations in Jamaica. In December 1845, shortly after the purchase of Lifton Park, Henry married William Harris Arundell’s “lovely and accomplished” eldest daughter, Mary Wilmot Arundell (b.1824), so lessening the blow to William’s ego. William himself had moved to Trebursye Manor, South Petherwin.

Despite the purchase by Trustees for Henry Blagrove, the newspaper report of the wedding and the addresses of the tenants still refer to William Arundell as being the landlord of the Estate, and reports in 1856 indicate that Blagrove only became considered to be the landlord at that juncture when he had become absolutely entitled. Nevertheless, in the 1850 Directory, Blagrove is referred to as owner of the manors of Broadwoodwidger and Upcott.

In 1853, most of Henry Blagrove’s right hand had to be amputated, after a shooting accident, when a colleague’s gun went off after he slipped. No foul play is insinuated, but that colleague was Renfrew Arundell, William’s eldest son, who must have anticipated becoming the estate owner himself for much of his life.

Meanwhile, William Arundell’s financial difficulties had not been solved and, despite selling Trebursye, he was by 1850 an insolvent debtor and forced to live abroad. He was discharged in 1854 and thereafter lived in a cottage at Lifton on his son-in-law’s estate, a kept man reduced to publishing poetry in honour of his son-in-law and his daughter. When he died in 1865, his assets were just £200! His widow died in 1871.

When, in 1856. Henry Blagrove became entitled under the will trust of his grandfather, Robert Haldane Bradshaw, there was a condition that he used the name ‘Bradshaw’ in future. Henry got licence from the Queen to do this and henceforth was known as Henry Bradshaw.

Particularly after his inheritance vested, Henry Blagrove /Bradshaw made significant alterations to Lifton Park, and William Arundell (as his agent in a railway related hearing, as Henry was too ill to leave his home) indicated to the House of Lords in 1862 that the house “was nearly rebuilt about six years ago” at a cost of £14,000 (Royal Cornwall Gazette, 6/6/1862 at p.6). The Penzance architect, Edward Harvey, has been mentioned in this connection, but there is also reference to an architect called Cornish in a bankruptcy hearing in 1856 for Launceston builders Gill and Ede, who lost over £1300 on their contract at Lifton Park (Western Times, 19/4/1856 at p.6).

In 1873, Henry Blagrove / Bradshaw is still listed as a major landowner in the Parish of Broadwoodwidger, albeit Lord Clinton, owner of Norton Basen, is described as ‘Lord of the manor’.

Henry Bradshaw died on 27/1/1877, aged just 57, after a long illness. His estate was in the region of £45,000. Despite his brother, Francis Bradshaw, succeeding him at Lifton Park, his executors arranged for all his furniture and all his stock and carriages to be sold by auction. There appears to be no other mention of the Bradshaw family as landowners in Broadwoodwidger, albeit they remained as owners of the Lifton Park estate until 1940.