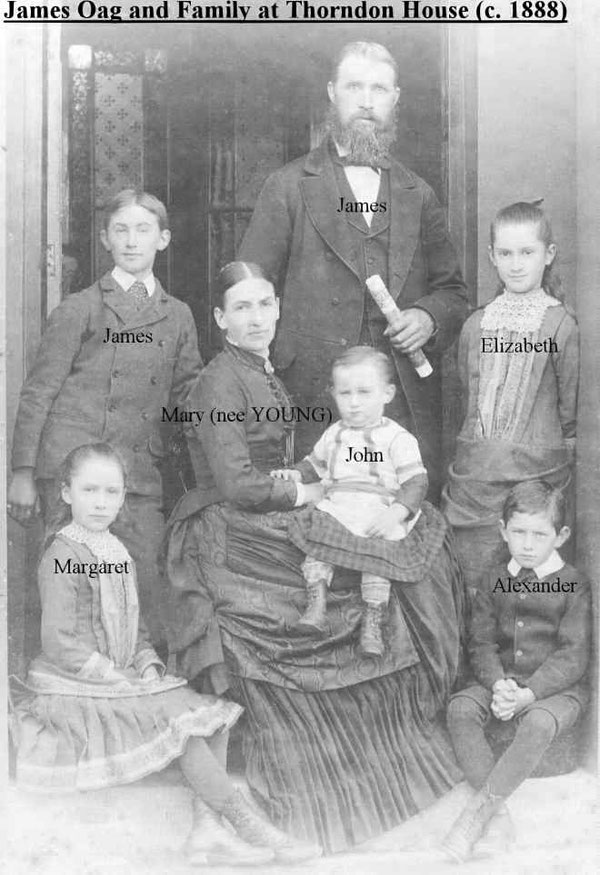 The Scot, James Oag, who lived for nearly thirty years at ‘Thorndon House’ in the late nineteenth century, was a highly regarded figure in West Devon. At the time of his death on 8th August 1912, his obituary recorded, “Few public men in the West of England enjoyed the respect and esteem won by Mr Oag. The soul of integrity, conscientious in the discharge of every public duty, a man of shrewd conceptions, deep insight, and wide sympathies, his word and judgement always carried considerable weight.” He was also described as “standing over six feet, well proportioned, upright, incisive and deliberate in speech” and “as a typical specimen of a Scotsman at his best”.

Oag was born in Caithness, Scotland on 5th December 1836. His father, also James, (b.c.1806), was a cartwright and the family, which went on to comprise at least eleven children, lived at ‘Thrumster’, Caithness. Oag qualified as a civil engineer and spent thirteen years in India, where he was responsible for the erection of numerous bridges. On returning to England, he acquired in the late 1870s the Thorndon House estate, which comprised 340 acres on which he employed nine labourers. His wife, Mary (née Young), from Forfar, whom he married in 1875, was some seventeen years his junior, but they had six children – three boys and three girls. Apart from the eldest child, James, who was born in 1876 in Chelsea, all the children were born in Broadwoodwidger, the first being Elizabeth in 1877 and the last Mary in c.1890.

Oag had an interest in a number of major companies. Soon after his arrival, he got involved with the proposed North Cornwall Railway. He became part of the group that argued that the line should go from Okehampton to Launceston via Halwill and the Carey Valley, rather than through Lydford (see Royal Cornwall Gazette, 15/7/1881 at p.6). There was self interest in this, as this would mean that it passed through his land. He and fellow Broadwoodwidger resident, Alexander Macbeth of Kitcham, were part of the subscription committee elected in 1881 to get contributions towards the cost of the line and he himself became a significant shareholder in that company and was appointed as one of the first directors of the railway company in 1883.

This initial section of the line took two years to build and was opened in July 1886. In 1898, he was appointed managing director of the newly created Old Delabole Slate Quarry Company Limited. This had been formed to take over the running of the Delabole slate quarries, which it was envisaged would be revitalised by the new rail line, part of the North Cornwall Railway, which went through the site. The line had opened at Delabole in 1893 but the link to Padstow was not opened until 1899.

However, neither the railway nor the slate quarries proved as profitable enterprises as their promoters had hoped. Managing the slate quarries, in particular, will have been quite an onerous task, as the quarries suffered huge landslips in 1900 and difficult trading conditions for much of the 1900-1910 decade. He was also involved with the proposed extension of the North Cornwall Railway from Padstow to Newquay in 1902, but finance could not be raised for this. He was also the prime mover for the Torrington-Okehampton light railway scheme, the principal purpose of which was to serve the numerous ball clay pits in the area, and had just negotiated the purchase of the final piece of land required at the time of his death. This became the North Devon and Cornwall Junction Light Railway, which was eventually opened in 1925.

He was also a member of the Launceston Board of Guardians for 24 years from 1880, serving the last ten years as Chairman – see presentation on his retirement below.

Oag was made a J.P. and served on the Okehampton and Lifton benches, where he was renowned for his fairness and impartiality. It was stated in his obituary, “Very few men were so free from prejudices.” He was made a County Magistrate in 1893. On the formation of the Devon County Council in 1889, he was elected for the Ashwater District. Then, in June 1905, he was made an Alderman of the County Council, and it was at this juncture that he decided to move from Thorndon House to Okehampton. He called his new home in Station Road ‘Thrumster’ after his old family home. He served on the Education Committee, the Bridges and Roads Committee and the County Rate Committee.

Presentation made to James Oag for 24 years service to Launceston Board of Guardians, ten as Chairman.

Alexander Macbeth of Kitcham also retired at the same time.

This extract from an unknown paper of an unknown date records an occasion when James Oag expressed appreciation for the way in which the Ashwater Bridge was built and was told a poem that gave an insight into its origins.