‘Historical Notes on Devon Schools’ by Richard Bovett (1989) records that the Church Records contain a reference dated 1819 to a school “run by the churchwardens for several years” and there is an item in the Churchwardens’ Accounts in 1854 mentioning the school. Bovett records that Freddie Parsons (d.3/11/1985 aged 90) felt that the school had been run in the eastern end of Church Terrace (i.e. The House of Industry) but his indication that he had actually attended it there himself seems doubtful.

1874 Establishment of Broadwoodwidger School Board

The 1879 Gazetteer records that the Broadwoodwidger School Board was formed on 6th July 1874 and then comprised John Helson (Chairman), Rev Richard Blagden (Vice-Chairman and clerk) and John Lillycrap, Oliver Veale and Richard Down.

The Broadwoodwidger School Board accused of jobbery! 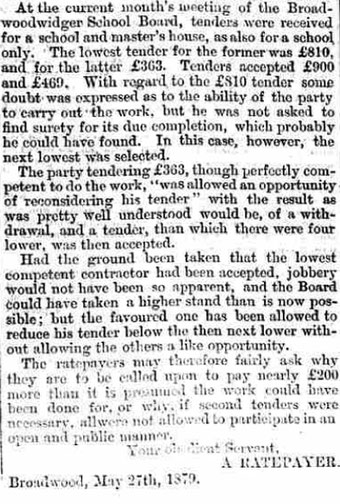 Opening of Thorn Cross and Ivy House Schools, with details of architects and builders

Thorn Cross School opened in 1880 and was built for 80 children. Philip John Williams (1847-1908), the son of a Penzance master carpenter, was the initial headmaster, a post he held for over 27 years. He was aided by Emma Martin, a local girl, who acted as housekeeper.

Ivy House School first opened on July 26th 1880, and was built for 91 children. The first headmaster was John Watkins Sluman (c.1844 -1911), from Thrushelton, who, at the time of the 1871 Census, had been living and working in Bratton Clovelly. His wife, Julia, (c.1846-1906), the daughter of Joseph Dennis Treleaven, a coach builder, from Stratton, whom he had married on 26/10/1870, was a Sewing Mistress, and, at the time of the 1881 Census, they had four children. There were initially twenty two pupils in the school.

However, the Slumans only appear to have run the school for a short time before moving to the school at Blisland and William Hicks Hill (1842-1908), who had been born in Northlew, was appointed headmaster of Ivy House School in the early 1880s. He ran it with his wife, Elizabeth, from Peter Tavy,for over twenty years, retiring in c.1902.

The location of the two schools so far from Broadwoodwidger Village is explained by the fact that there was a statutory maximum walking distance of 3 miles and at these sites, the whole of the parish could be served without the need for a third school. 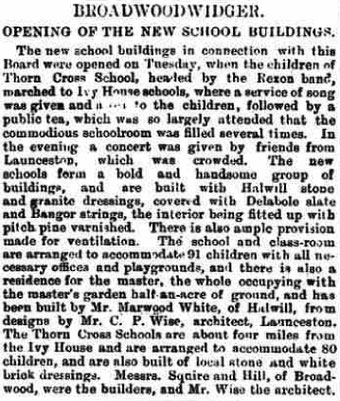 At the time of the conversion of Thorn Cross School in 1972, plans showed the existing elevations – see below. It is thought that the two porches were separate entrances for girls and boys. (plans courtesy John O’Regan) 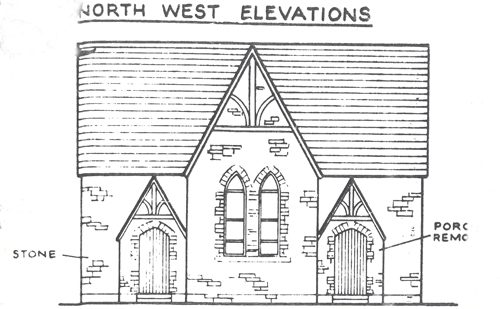 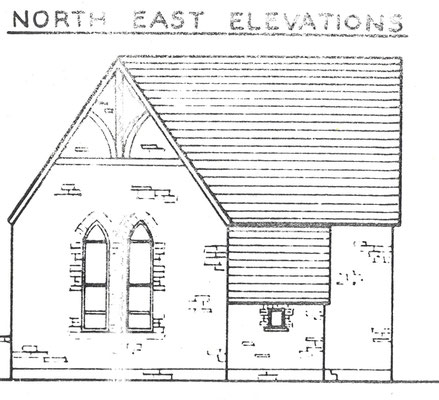 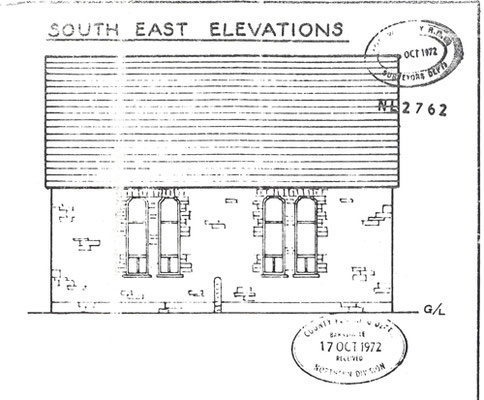 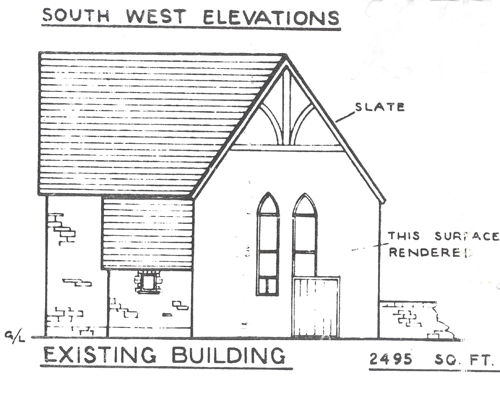 With the establishment of the schools at Thorn Cross and Ivyhouse in 1880, the Church School became solely used for infants. The Church Records confirm that, in 1883, a National (Infants) School was built close to the church suitable for 70 children at a cost of £140. This is now the Church Room, soon to be the Community Hub, and it was built on the site of the old Parsonage, which had long been in disrepair. However, the formal conveyance of the site was not completed until a Deed dated 29th July 1886, under the authority of the School Sites Acts, whereunder Charles Luxmoore Brooke and Esther Jones Burd? freely and voluntarily gave the Minister and Church Wardens of the parish of Broadwoodwidger and their successors a piece of land situated in the parish containing 24 perches or thereabouts for a school for the education of Infant children only of the labouring, manufacturing and other poorer classes in the parish. This Deed was destroyed in WW2 when held in Exeter and it is unclear precisely what interest the Luxmoores had in the land, for one would have thought that the Parsonage was owned by the Church. The vicar for the time being was to have a leading role in the running of the school. In the 1890 Directory, the schoolmistress is Miss Harriet Brown (b.1866), who had been born in the village, whereas by 1893, it was Miss Mary Walters. The average attendance then was 14.

Tenders invited by the Broadwoodwidger School Board for the erection of a Master’s House next to the Thorn Cross School. This was completed in 1893.

Defaulters due to so many babies coming!

Meeting at Ivy House School to elect a new School Board, as the term of office of the previous Board had expired. Concern was expressed at the invitation to H.M. Inspector to inspect the infant school at Braodwoodwidger issued by the Rev Blackwood Price. He argued that “if a thing was worth doing at all, it was worth doing well”. However, the general view was that, if this was passed as ‘efficient’, not only would further obligations be imposed on the ratepayers, but there was likely to be an impact on numbers attending the two existing schools at Ivy House and Thorn Cross, possibly prejudicing their future. The Board felt that the accommodation that they provided at the existing schools was more than sufficient.

James Oag of Thorndon House was the Chairman of the Board and Messrs Smale, Bray, Palmer and Down were re-elected. Alexander Macbeth of Kitcham was vocal at the meeting.

Sheep-shearing and other competitions at Ivy House in connection with Devon County Technical Education Scheme. These included, rather bizarrely, ‘spear-making’!.

Infants’ School Annual Treat, with Broadwood Brass Band, who were popular in this decade at functions in the locality.

In 1902, the Church School was not taken over by the Local Education Authority under the 1902 Act. By 1905, it was “no longer used as a public elementary unprovided school” and was used for a Sunday School and “for parish meetings, young men’s club, social evenings, reading room etc.”

In 1905, on the 25th anniversary of the opening of the school, Mr Williams was presented with a field glass.

Williams had been obliged to relinquish his post through ill health in January 1908 and died in late February. He was aged 61 and was a batchelor.

His successor was Miss Ellen Caddy, the only daughter of Richard and Harriet Caddy of Sydenham Damerel. Her mother, who had been mistress of Sydenham Damerel School for some 25 years and who had lived with her daughter since her father’s death in 1879, first at Skilgate, then Lifton and finally Thorn Cross, died at Thorn Cross School House in November 1909 (see CDP 27/11/1909 at p.4),

Death of William Hicks Hill, who had been headmaster of Ivy House School for over 20 years. 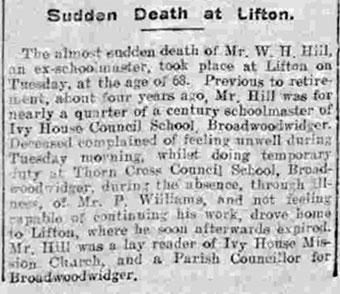 Ellen Caddy raised funds for a piano for the school and introduced music and drama into the curriculum. 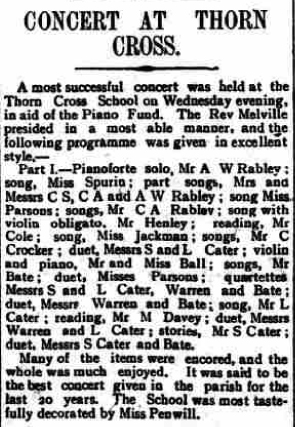 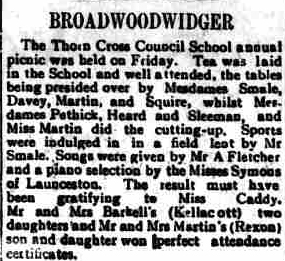 This recorded that Ivy House School had an average attendance of 56. Robert Edward Mills, the headmaster, had taken over from William Hicks Hill in c.1902.

At Thorn Cross School, the average attendance was 48. Mrs Ada Chapman had now taken over from Ellen Caddy and was assisted by her husband, Robert Frank Chapman. The 1923 Directory still lists them as running the school. 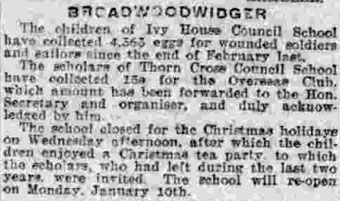 Presentation on retirement of Robert Edward Mills (1858-1936), who had been headmaster of Ivy House School for 20 years.

Mills had been born in Stonehouse, Devon and was married to Sarah Jane. They had had 6 children but only 3 survived to maturity. 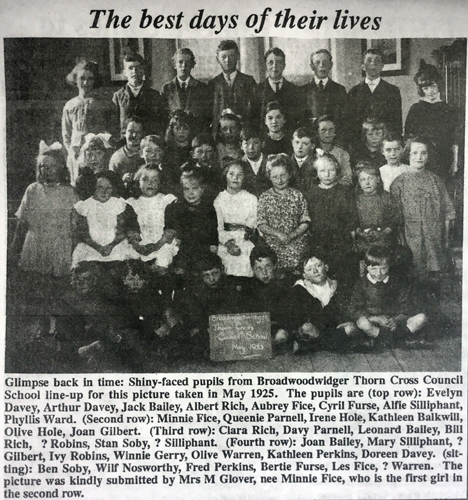 Thorn Cross School closed in December 1946. The pupils there then attended Ivy House School, which became known as Broadwoodwidger School. Some time later, it became just a Primary School, with elder children being educated elsewhere. 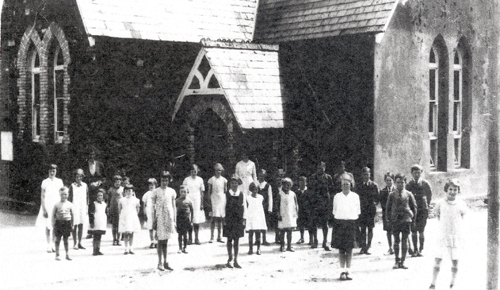 1979 Conveyance of Church Room to Exeter Diocesan Board of Finance

In light of the destruction of the 1886 Deed by which the Church Room had been conveyed to the churchwardens, this Conveyance of the property by the Parochial Church Council of Broadwoodwidger to the Exeter Diocesan Board of Finance was accompanied by two Statutory Declarations by Ronald John Worden and Kathleen Violet Parsons as regards user for charitable purposes and repairs. The Conveyance contained a provision that the Council would continue to use the property for charitable purposes and might with the consent of the authority sell the property and apply the net proceeds “for any such purposes affecting the said parish of Broadwoodwidger or any part or parts thereof”.

At the time of the 1980 centenary, the children reviewed the old log books of the school.

Click on image to see the analysis by Wendy Withers of those and the children’s drawings recording extracts from them. 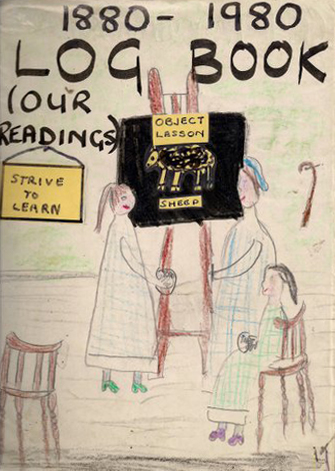 In 1990, a time capsule was buried when the reservoir was being built by the children of Broadwoodwidger School. They have all been invited to return in 2040 to help dig up the capsule. 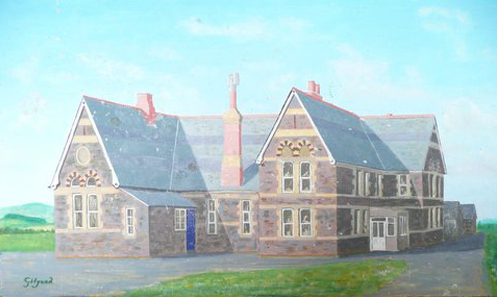 Sadly, in the summer of 2011, due to lack of numbers, Broadwoodwidger School was closed.