There has been no public house in the village for over a century, but the principal public house from the mid-seventeenth century until the First World War was sited in the property now known as ‘Church House’, situated on the village green. It has operated under several names.

According to the Record of Licensed Recognisances for the Devon County Quarter Sessions for 1662, the property was registered as an Inn or Alehouse, with the most unusual name of ‘Poetry’. No details of licensees are available until 1753, when it was Joseph Squire and the Squire family appear to have been involved with it for a further 250 years. However, in the years 1757-1759, two other persons are also named as Licensees – Roger Crocker and Bennet Newberry.

In 1819, a Joseph Squire took over as the Licensee and appears to have decided to change the pub’s name to ‘The Hare and Hounds Inn’. He was married to Elizabeth and had a daughter also called Elizabeth (b.1809), a son called Joseph (b.1818) and twins Martha and John (b.1821), but, that year, possibly in childbirth, his wife died. Joseph continued to hold the License until his death in 1865, aged 90, when it was taken over by his daughter, Elizabeth, who never married.

Elizabeth’s sister, Jane Northey, came to live at the Inn in 1873, after the death of her husband, George Northey, and remained there until her death in 1887. In the 1870s, her daughter, Rebecca, who is recorded as staying at the Inn at the time of the 1851 Census, married John Jackman, a farmer, and they and their children appear to have moved into the Inn to help Elizabeth after Jane’s death. They were certainly there at the time of the 1891 Census. Elizabeth, then aged 93, was still recorded as the Innkeeper in 1901, but she died in September 1902. Her niece, Rebecca Jackman, now a widow, took over as Licensee.

The newspapers do not contain many references to the Hare and Hounds Inn. A number of auctions of livestock and wood appear to have been held there from time to time and, as the final “Broadwoodwidger Rent Audit” by the Luxmoore family was held there in 1907, it may be that their annual meetings relating to the payment of tithes in past years had also been held there.

At the time of that 1907 meeting, the inn was still called ‘The Hare and Hounds’, but shortly afterwards Rebecca seems to have been persuaded by advocates of the Temperance movement about the ill-effects of alcohol and, at the time of the 1911 Census, it was known as ‘The Temperance Hotel’. However, Rebecca died in April 1911 and the property became a private dwelling, being purchased by the local blacksmith, John Down, albeit he held poetry and musical evenings there, according to Sabine Baring Gould. There is no mention of an Inn in the 1914 Directory. 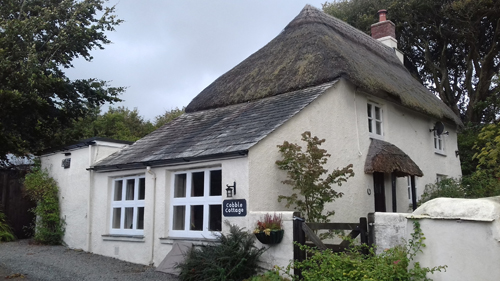 There was another public house at Thorn Moor in the mid-nineteenth century. This was at the thatched property now known as Cobble Cottage, but which in the past has been referred to as ‘The Cottage, Thornmoor’ or ‘Thornmoor Cottage’. The 1850 Directory lists a Thomas Walter as a victualler at Thorn Moor and he is also listed as a publican there in the 1841 Census. Walter and his wife, Mary, were both born in Lifton, and he is still recorded recorded as the inn keeper in the 1861 Census, albeit then aged 74. However, he died that April. The pub was then taken over by John Littlejohns, but, in the 1866 Directory, he indicated that he also operated as a tailor. Littlejohns had been born in Broadwoodwidger in c.1826 and was married to a local girl, Charity. They had been living locally at Thornmoor at the time of the 1861 Census. However, by the 1870 Directory, Littlejohns merely refers to himself as a tailor. During the time the cottage was used as a pub, it was owned by Elizabeth Whear of Chelmsford, Essex, but, in 1884, John Littlejohns was able to buy the property for £60. He and then his son, Frederick, who was a great supporter of the local Baptist Chapel, continued to operate as tailors from the property – Frederick dying in 1952 and the property only being sold in 1966 upon the death of Frederick’s wife, Florence.

(with thanks to Liz Hartley and Gillian Dubey)